Last weekend, Eric and I went to T or C (Truth or Consequences NM) to meet up with Sally at a fiddling contest. That’s not a joke in case you wonder, I’m a big blue grass fan. We stayed at a fabulous bed and breakfast about 45 miles from T or C in a tiny town called Kingston, just outside of a slightly larger tiny town called Hillsboro. I tell you, Hillsboro has come a long way (previous entry). I remember that even ten years ago, you could go to the local (teeny tiny) grocery and find recipes for spotted owl stew posted on the bulletin board. It’s become more progressive since then. Before I get too far off track -as I most assuredly will this entry being about sustainable building- the least of the weekend was the fiddling contest. Below is the highlight of that event. An adorable little cowboy named Lane. You can’t see him from behind but he’s still so little as to be wearing diapers. Quite shy he was; his belt and boots are matching ostrich.

Abject cuteness dispensed with, we stayed at a B&B called the Black Range Lodge, originally constructed in 1880 when it housed cavalry and miners. Owned by Catherine Wanek and Pete Fust, they’re a story unto themselves. As it happens, Catherine is an expert in straw bale construction and wrote a beautiful book called The New Straw Bale Home. Dang, now I see I could have gotten it for $11 less at Amazon but hey, you have to support authors. Besides, I got my copy signed. The book is gorgeous, coffee table style with detailed information on costs, processes etc. Of course their property is a testament to ongoing sustainability which I’ll show you next. They are very thrifty. I liked that none of the towels matched. They feed you an awesome breakfast too, complete with entertainment from Pete who does all of the cooking. He is a card. He says his cooking is so good, he’s gotten five marriage proposals. Two of them from women. Below are their pictures.

Here are more pictures from the place. Below is the stove. Ancient but still works great. Pete says that an 80 year old man came by the week before and wanted to see if they still had it. Supposedly, he worked there when he was 12. He said it was old then. I thought the burners were lovely, a very interesting pattern (below)

Below is a picture of the kitchen. 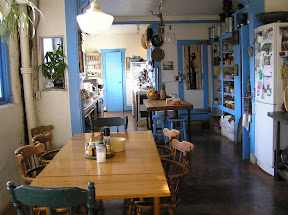 Below is a photo of the second story landing (three floors, Catherine and Pete live on the third floor). Look at the size of those beams. There’s musical instruments everywhere, lying around. Books too. 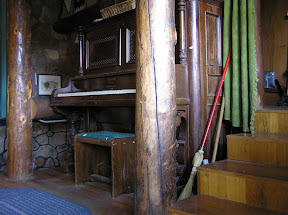 Below is a photo of one of the bedrooms. 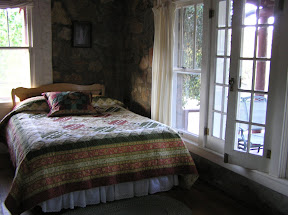 On the back side of the lodge, they’re slowly adding straw bale insulation to the exterior. Once finished, it looks quite nice, very much in keeping with New Mexico style architecture (“pueblo”). 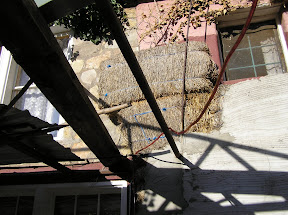 They’ve almost completed building a cistern to collect all of the rainwater (below). 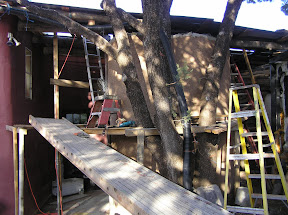 Below you can see the tubing connecting the drain pipe to the cistern. 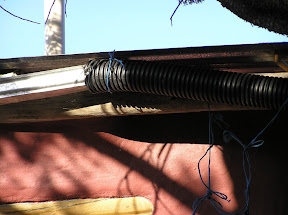 Catherine says they have very good water and it’s free but being ever frugal, she would rather harvest rain water for the grounds and washing. All of their water is recycled. It passes through a leech field. Everything is recycled and guests are expected to follow through. There were separate buckets for different foodstuffs. Plant based products in one bucket. Tea and coffee (grounds and liquid) into another. Pete says the fruit trees like the acidity. I didn’t know that. I know next to nothing about gardening.

More items from the grounds, fruits and vegetables are stored in this (cob construction) root cellar outdoors. 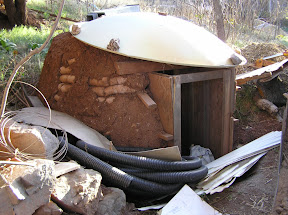 Here’s a wood fired hot tub, again, all made on site. 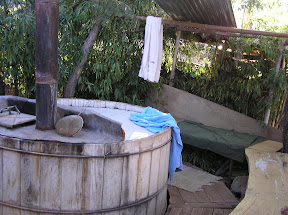 Below is a “lean to”, pretty fancy. Great place to sleep in mid summer. Not that it gets hot here. 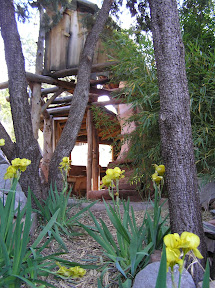 We found one of the permanent residents hanging out in the lean to. She was very friendly and in need of pets. There were lots of dogs around, most of them supplied by guests. A very pet friendly place. Not having dogs anymore, we got our dog-fix. 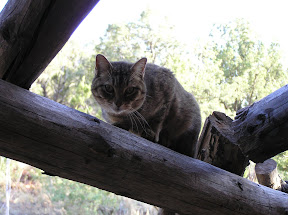 Another thing on site was this hen house (serving breakfast, you need eggs) built of cob (below). Catherine likes experimenting with different kinds of sustainable building. Eric thought it was funny that the hen house had bamboo vigas.

Speaking of bamboo, Pete grows 24 different varieties of it. He produces enough for building projects and for sale. He also sells plugs. People travel just to get his plugs. Below is a picture of their humongous green house, two stories high. Our bedroom window faced it, making for a lovely view.

Below is a photo of one of the flowers on the banana tree. Who knew they were so pretty?

The Black Range Lodge is actually a compound. There are other buildings on the property where guests can stay. One is this straw bale house that Catherine and Pete built, featured prominently in the book. One of it’s many features is that is is completely wheelchair accessible. It was originally designed for her father before he passed. Below is a photo of the kitchen. The flooring is bamboo.

Below is a photo of the living area. This floor is concrete (?). The house is heated with hot water running through the flooring.

Below is a picture of the outside deck. I saw several bald eagles. We have a lot of prey birds in New Mexico. Yet another reason to keep kitties indoors around here. Unlike other places, kitties are eaten by birds rather than the opposite. In NM, it’s road runners that are the biggest killers of song birds. They get the eggs.

Okay, that’s all of the lodge stuff (okay, just a bit more at close). I thought it was a great place, great energy. I’ve been talking about having a slumber party and inviting only my home sewing friends for a retreat. This place is a little out of the way. The closest airports are Albuquerque and El Paso. It’d be several hours then from either place. Do you think anyone would come? I think it would be loads of fun.

On Saturday, with nobody but Lane (decidedly unsociable) to entertain us at the fiddle contest, we went through the shopping district in TorC on our bikes. We like to take bikes on day trips, it’s easier to get around in little towns. I found this great little store owned by Twyla McBride. She was born and raised here which we (and evidently others) didn’t believe at first. She says she’s always been different. Her store is Moon Goddess Gallery and Boutique (414 Broadway; write for more info). She sells things that she and her friends make, very inexpensively. Everything she makes is of recycled materials. I’ve seen a lot of indie type “repurposed” goods and most of it looks lousy. Terribly sewn, pieces don’t match, yet the maker wants a gold star for having recycled an original ugly item into something even more hideous -Sorry! (she squeaks). Her stuff was cute! Cute ideas too. Her theme could be seen as a little hokey if you’re cynical but the “fairy” stuff worked for her. When I went in, she was sewing (below).

She says that she can’t sew some of this stuff fast enough, that it sells like crazy. The kids all love it and she gets a lot of repeat business from out of towners. I know I’ll be back. Below is a photo of a fairy apron. She makes these out of old linens. She says she never has to buy anything anymore. People walk in with bags of stuff belonging to their auntie who just died.

Continuing in our travel, we found this gentleman to watch our bikes outside of the grocery store. I asked his name but of course I forgot it.

He’s quite the repurposer himself. I just loved this trailer he built for his bike, using an old wheelchair and cabinet door for the platform. He says the only thing he bought to make it was the bar connecting it to the bike frame. He had a friend order it for him over the internet. He’s a handyman and does a lot of yardwork. He says the trailer is perfect for tools on the job.

It’s getting time to wind this up so here’s one last thing about the lodge. Below are (left to right) Ian, Pete and Taran doing the see no evil thing with left over waffles (the hens get those). Ian and Taran are an interesting story themselves. Guests at the lodge, they’d been there for a week when we got there. They are cycling across the country. They started in Vancouver BC, worked their way down to San Diego, from there they headed east to end up here. They’ve gotten very comfy, Pete has put them to work. When we arrived Friday, Ian was plastering the cistern. Taran was driving the front loader. A fourteen year old city boy is going to have a hard time leaving that behind. Anyway, they’re blogging their adventure. I haven’t read their whole blog but it’s a pretty neat story. From Kingston, they’ll head to Houston. Then they’ll take the plane back to Vancouver.

As it turns out, there’s quite a community of cyclists that come through Kingston; it’s a major cross country route popularized by the Adventure Cycling Association. Did you know there was a TransAmerica Bicycle Trail? I didn’t. It’s pretty cool. You buy a guidebook for a given segment. Each guidebook gives you detailed information on how far to the next water, food, camping or whatever amenities. They keep it up to date too.

Last but not least, a picture of Eric and me outside the lodge.