Traditionally, each sewing machine in the factory has a side table that is placed alongside the machine. This is where work in process is placed. I had a difficult time finding any tables of the size I wanted, at a price I was willing to pay and I also had the problem of moving small, cut pieces around the factory in such a way that they would not be lost or soiled. At the same time, I was looking for bundle carts. I had two but wanted more, preferably smaller ones. Somehow, I decided that the ideal solution was to buy smaller carts that would take the place of side tables. Problem is, those cost more than I wanted to spend (the cost of shipping is the deal killer) and I wasn’t sure they’d perform dual duty as side tables.

After looking over a period of months, I found laundry carts used in laundromats and bought one (@$105, shipping included) to test it out. My sample maker didn’t like it at all. She is adorable and all kinds of wonderful but often doesn’t like changes so I decided to wait and see. Then I tentatively bought another one because she wasn’t letting anyone else use the cart and I wanted more feedback. Long story short, I ended up buying 10 of the R&B Wire 96B “light” duty wire frame laundry carts and now everybody loves them. Boot camp attendees especially; I promised to write this post for them so they’d know where to get them at the lowest price.

Be advised that the carts are described as light duty which was why I wasn’t sure about them because I can’t use consumer grade products and expect them to last. Result: if these are light duty, I’d hate to see the regular or heavy duty ones. There is nothing rickety about these and the caster quality is top notch. The basket height is perfect -they fit under the machine perfectly with enough clearance to miss the left hand sewing drawer. The basket is still high enough that you can easily reach into the basket to remove work pieces while seated. The only downside to these (for my purposes) is that they didn’t come with a liner so it is possible that smaller items can fall out. We made our own liners out of 5 different cheerful colored fabrics which served to brighten up the place (see top photo). Another thing to watch out for; as these are laundry carts, you can get the optional poles that mount to the cart. I decided against these because the poles look just high enough to hit the feedrail, posing a serious health hazard. 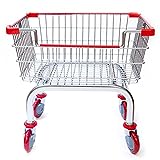 Other Options: If I’d had a larger budget, I would have been sorely tempted to buy this cart (at right) because they’re prettier and I like for my factory to be pretty as so many sewing factories are not. Pretty cheers you up; my sewing factory has lots of bright and happy colors. But I digress. The reviews said these carts were fabulous but as most people didn’t buy the kind I did, there was no way to compare the two carts -at least for my purposes. The red carts cost about $140. I do like that the red carts have one side lower but again, who knows how that works out with respect to fitting under the sewing table while still leaving clearance for the sewing drawer.

When I decided to buy the first cart, I also bought two other kinds of carts that are designed for consumer use -just hoping they’d work out with a few modifications. I didn’t buy them on Amazon but it was this style and this one. The modifications I made were to take the sections out and sew larger liners to fill the space.

These carts are okay but won’t be used heavily in here. The frames are a bit rickety by comparison and while the casters aren’t the typical cheap plastic things usually used in consumer items, they are rather small. However, the casters will lock so that is a plus. If you’re on a budget, these might work well for you in the interim. One last bit of advice -something I didn’t pay attention to- if you’ll go this route, opt for the one on the left ($44) because it has bars running across the bottom brace which will support the weight of whatever you put into the basket. The one on the right doesn’t have these and it was a bit annoying. We placed a piece of lumber across it when we were using it but didn’t have time to actually mount it and the wood kept sliding off.

Before I go, based on emails I’ve received, people don’t realize that the apparel manufacturing boot camps we host are a charitable activity, not a business one. We are still a sewing factory (and pattern service) that is accepting new customers. If you’re looking for no minimum but high quality patterns through production, give me a call (505-877-1713) .